The Importance of Slippers

One could argue that electricity, or the purification of water, or buttered bread was the most important invention mankind has been fortunate enough to uncover. But you would be wrong, because there’s one invention in a league of its own, and it comes in the form of the result of generations of breeding socks and shoes to create the ultimate mix: the slipper.

About sixteen hundred years ago, a man found a lone sock on the side of the road. He was a generous man, this man, so he took it home. Eight months later, the sock gave birth, and the father was soon apparent. The children had the fluffy soft skin of the mother, but the heart and sole of their father, who was evidently a shoe.

Different varieties of this strange hybrid started to surface.

There was the sandal slipper, a much-needed alternative for the socks-and-Crocs wave that swept the nation with its pagan ways.

The boot slipper was passed down from generations of manly-man Texas rangers who were tired of losing toes from winter frostbite.

The bunny slipper, which has a terrible habit of reproducing at uncontrollable rates, has earned the title of “The fad that just won’t die”. Seriously, dude. You’re wearing a rabbit on your foot. It’s not going to give you good luck.

They're mocking you. All of them.

Wrong. So many levels.

The stay-at-home moms of the slipper realm adapted to their work quite easily. 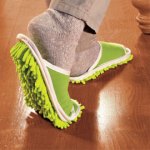 And the newest evolution, the Ugg, was named for the first word its mother said when she got a good look at its face. It was born and began to flourish right around the same time Justin Bieber’s music became popular.

Coincidence? I think not.

The face even a mother couldn't love.

Oh, and it’s finally fall break this week, which means I’ll be able to respond to the seventeen million comments I’ve let pile up, and do the other-blog commenting I’ve been neglecting. I haven’t forgotten anybody!! Just been insanely busy. And tired, which is why I wrote a post on slippers. (Mine are almost identical to the “boot” ones above :D)

A teen writer and future world ruler. Llamas make me happy.
View all posts by Aloha →
This entry was posted in Misc. Posts and tagged funny, humor, i'm so tired, postaday2011, slippers. Bookmark the permalink.

4 Responses to The Importance of Slippers